Do not consider the contents of this blog as professional medical advice.

The fibroid fissure has almost completely disappeared, but the raised area and the new scar are still tender to the touch and are still painful to manipulate. 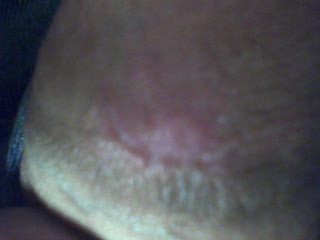 The fleshy crater has almost completely filled in from the bottom, and there is now a scab there. 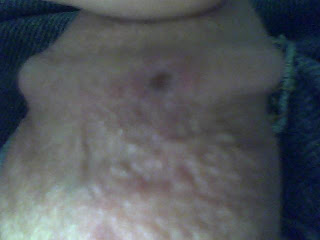 Nevertheless, I will still keep the areas protected by bandages and ointments until they are completely healed and no longer painful.

To the regiment of ointments I now employ, I will be adding topical vitamin E soon.  The penis is a terrible place to have scars, and it is said that vitamin E is a good substance for the reduction of scars.

In the same way that my wounds are now closing, I suppose I ought to begin putting down my closing thoughts on all of this.

In spite of the stress of all of this--the penile surgery while still conscious, the stitches, the blood, years of painful insomnia, denial from my parents that anything was remotely wrong and countless trivializations of the pain I was in--I feel that I have become a stronger person.

It has been more than a month, now, that I have been writing about this.  I had long had feelings buried deep inside about what was done to my body, and things have certainly gotten shaken up by my simply bringing this matter forward and talking/doing something about it, but this was all a necessary process for me to be able to live a better life.

I just wish I could stop thinking about it.

I have been on that operating table, conscious, and aware of the surgery going on, and I was in little pain at the time.  I already had hated needles before this.  The sensation of needles slowly entering the penis and injecting is not so easily forgotten, and I doubt I ever will be able to forget that sensation.  I still wake up to reliving that moment in my nightmares.  Even while mostly numbed, it was by far the most stressful moment of my entire life within recollection.  The mere knowledge that someone I had barely met was cutting off a part of my penis was overwhelmingly panic-inducing for me.

I am a student going into a health-related career.  I have seen disturbing medical events, fresh burn victims, purulent cases of road-rash, more types of bodily secretions than I can count on my own two hands, and many similar things.  I can handle doing and seeing this much.  I can live through it.  Even so, my comfort for human gore as high as it is, I cannot explain how different the situation is when it's your own body in question--your own body on that operating table and being conscious for the entire process.  Merely writing this paragraph is making my body shake.  To look down and see bloody gouges and surgically exposed tissues and the demonstrative manipulation of these open, bleeding wounds on your penis is not something easy to relate to, but believe me, it can change you.

To think that something much more drastic was done to my body shortly after birth with no anesthesia astounds me.  I can't even begin to fathom the sheer terror and stress that the infant goes through.

I don't say this out of conjecture--I say this because I have been there on that table, now, twice: once outside of my elephantine memory's range, and the second time while conscious three weeks ago, and I am still reeling from it.

Routine infant circumcisions are even much more stressful for the baby in question because a much more drastic procedure is done without any form of appropriate anesthesia, all because neonatal physiology cannot stand up to the drugs involved.  I will never be able to idly stand by and allow my own children to pass through that same eye of Hell.  I can never allow this to be done to my children.  Ever.

The anxiety I felt on that table, even as horrid as it was, is nothing compared to that which a baby feels when he is merely days old from a circumcision.  The child invariably screams in agony during the entire bloody procedure, that is unless he goes into a rare form of neurogenic shock (coma) from the pain.  This is unacceptable.  If I ever have a son, I will love him enough to think he is perfect the way he is born--no disassembly required.  If he ever asks why it wasn't done, I will tell him that the very idea of routine infant circumcision is archaic, barbaric, pointless, erroneously "prophylactic," and that I had no right to make that decision for him.  I'll tell him that I loved him enough to think that he was perfect the day he was born.  I have no right to make a decision to modify another's body for no legitimate medical reason.

What we are doing in the US on a grand scale is not so different (in principal, at least) from what people do to little girls in Africa in the case of female genital mutilation (hereby to be referred to as "FGM")--both are amputative, painful, and unnecessary procedures that impugn upon the basic right to bodily integrity, and both have bullshit "justifications" that run alongside.  It is just a question of the tint of the cultural lenses we wear.  We abhor the FGM practices in Africa, but if we were to be objective and remove the colored lenses that we call "cultural perspective" from our own eyes, we would look down upon our own mutilating hands and recognize in horror that the substance covering them is blood of the very same color.

On one hand, we can hear no amount of medical study done about supposed "benefits" (and I am sorry to say that such studies do exist, and that they were even written in the US up until around the 1960s) of FGM--we simply prohibit it on a federal level.  In the same way, I consider both male and female underage genital mutilation/modification practices to be irreconcilable; medical studies be damned!

As a student going into the medical profession, I find the rate of surgical complications (which I can personally atone to being a living hell) and mortality rate (about 9.01 per 100,000, minimum in the US alone in 2010) of routine infant circumcision unacceptable.

I am very decidedly against any genital modification, alteration, or mutilation being performed on any body part of unconsenting minors of any gender, and this is not ever going to change for me.  If the topic comes up in conversation, I will be able to speak out about it from experience that bad things can and do happen.

The part that frightens me is that if I didn't grow up botched and were to have kids, I don't know what decision I might make for my sons in this matter, although I now recognize that this shouldn't even be a parental decision.  The thought haunts me that if I weren't botched, I don't honestly know if I would have the audacity to break this bloody cycle.

My own father speaking favorably of having my circumcision done to me even in spite of the surgical complication (which is a very alienating thing to do) speaks volumes about where our society is on this issue.  To merely be a circumcised father in America and to not pay forward the pointless and harmful toll of infant circumcision would be to admit in some way that what was done to the father was wrong, and I get the impression that this is more emotional baggage than this type of man can bear.

I originally intended this journal to only be a document about my healing procedure.  The things I write here beyond the bare details of my body are genuinely a part of this healing process for me.  Were these feelings not relevant to this process, I would not include them.

That is all, for now.

Email ThisBlogThis!Share to TwitterShare to FacebookShare to Pinterest
Labels: Photo

An important note on this blog...

Be sure to read this blog by the earliest posts first.

Start at the top of the Archive below, and work your way down.

If you send this blog's URL to anyone, please send them here first.

I invite any and all feedback from readers, including questions.

Links that led me to discover my botched circumcision, and more